Welcome to The 139 Collective Blog! In this particular post, I want to talk to you about a big dream. I’ve worked in church ministry my entire life. I love the body of Christ. But just because I love something doesn’t mean that I don’t see the flaws, the things that need to change and shift. According to a study from the Pinetops Foundation called The Great Opportunity, people are leaving behind the traditional, four walls of the church at record speeds! In fact, more churches than ever are closing their doors. This study states:

“Based on the current rates of retention and evangelism, it’s estimated that 42 million young people could leave the church by 2050.

If, however, we can revert to Gen X rates of retention and evangelism, that number can be reduced to only 20 million.

22 Million = Young people who would know Jesus who otherwise wouldn’t: This is our Great Opportunity.”

Why are these statistics important? Because in order to have a revival that reaches more people than have ever been reached by any of the major revivals combined, we have to think about church differently. We have to do church differently. We have to go back to our origins in Acts, knowing that we are given authority and power through the Holy Spirit, understanding that each believer is a missionary working with unique gifts, and being empowered to go out and change the world!

As a little girl, I never had a doubt that I would someday change the world. Didn’t we all believe that at least a little bit? People who change the world are people who have had miraculous encounters with a really great God. People who change the world are those who have been equipped and trained and then sent out or empowered to take risks for the Kingdom. Too often what I see in “church” is a large group of people coming to hear one person’s gift (the lead pastor or speaker or the worship leader) without the understanding that each one has been gifted to play their own role in the body of Christ. We have become consumers rather than people who work the soil!

About three years ago as I was on staff at a local church as the worship pastor, the Holy Spirit began to birth in me a really big dream, one far greater than anything I could ever accomplish alone, one that would eventually cause me to have to leave that comfy, cozy position and take a really big leap of faith. Interestingly enough, as I began to share my dreams with the leadership at that local church, the more and more I began to feel this separation. No longer was I really on the same page as leadership. I became an outsider. I have read and heard, however, that I’m in good company in that regard. 🙂

As the confines of that 4-walled building started to fall away, I started to really dream. What would be possible if we just changed everything? What is church really? The Bible has some really great information on that!

We decided intentionally to call our times of togetherness a gathering rather than a service. Why? Acts 2:42-47 states:

Every believer was faithfully devoted to following the teachings of the apostles. Their hearts were mutually linked to one another, sharing communion and coming together regularly for prayer. A deep sense of holy awe swept over everyone, and the apostles performed many miraculous signs and wonders. All the believers were in fellowship as one body, and they shared with one another whatever they had. Out of generosity they even sold their assets to distribute the proceeds to those who were in need among them. Daily they met together in the temple courts and in one another’s homes to celebrate communion. They shared meals together with joyful hearts and tender humility. They were continually filled with praises to God, enjoying the favor of all the people. And the Lord kept adding to their number daily those who were coming to life. (The Passion Translation)

This sounds much more like gathering, in my humble opinion.

No one and I mean no one should have to walk this path alone. As western Christians, we live under this false belief that we should have it all together, and if we don’t, we can’t let anyone else see it. I call B.S.! The Father created us for community. He knew that we would face trials of all types. Jesus even said it was good that He went away so He could send us the Comforter, the Holy Spirit (John 16:7). He also gave us people with whom to walk out the Way.

God didn’t create “church” to be a social club. He created it so that we would come, get to know Him more, be equipped, and become empowered to go out and duplicate ourselves in others. A church without multiplication DNA is not a church–at least not in the way the Holy Spirit designed it.

Having a passion for other people is a main character trait of Jesus, and the whole point of our lives is to be like Him. Therefore, activism should come out of the overflow of our hearts because of the mercy, kindness, and grace we have been shown. We are called to fight for “the little guy.” We are commanded to be there for the widows and the orphans. We are to shine the light of Jesus everywhere, and His example to us is that wherever He went, people were healed and set free. The Church should look and act like this!

I am firmly convinced that through our adoptions as sons and daughters of the Father, we have been given His birthright. That birthright is creativity! I want to write words and music to reflect that. I want to see artists make with freedom! Whatever the particular medium, let us use it for His glory.

Jesus tells us to love others as we love ourselves. The problem is that we are struggling under a love deficit. In our culture, our value is based on what we do, not who we are or who we belong to. Knowing our value to our Father and that it is not based on performance or whether you did this or that will revolutionize the way you look at yourself and also others. That’s why yoga and meditation are so important to what I do in my personal life and why I teach these valuable skills.

You see, everything is interconnected. I dream of having a place where creatives can come and create, where musicians can come and play, where people can take a yoga or a cooking class and learn how to be the best versions of themselves. I dream of a church where the message of the Gospel overflows out of our hearts because of genuine love for Christ, where people are nurtured and cared for authentically. I believe we can do this! And that’s why I started The 139 Collective. 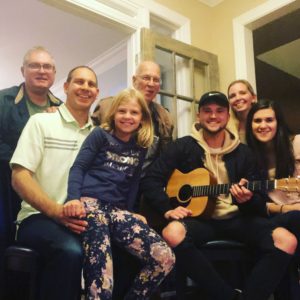